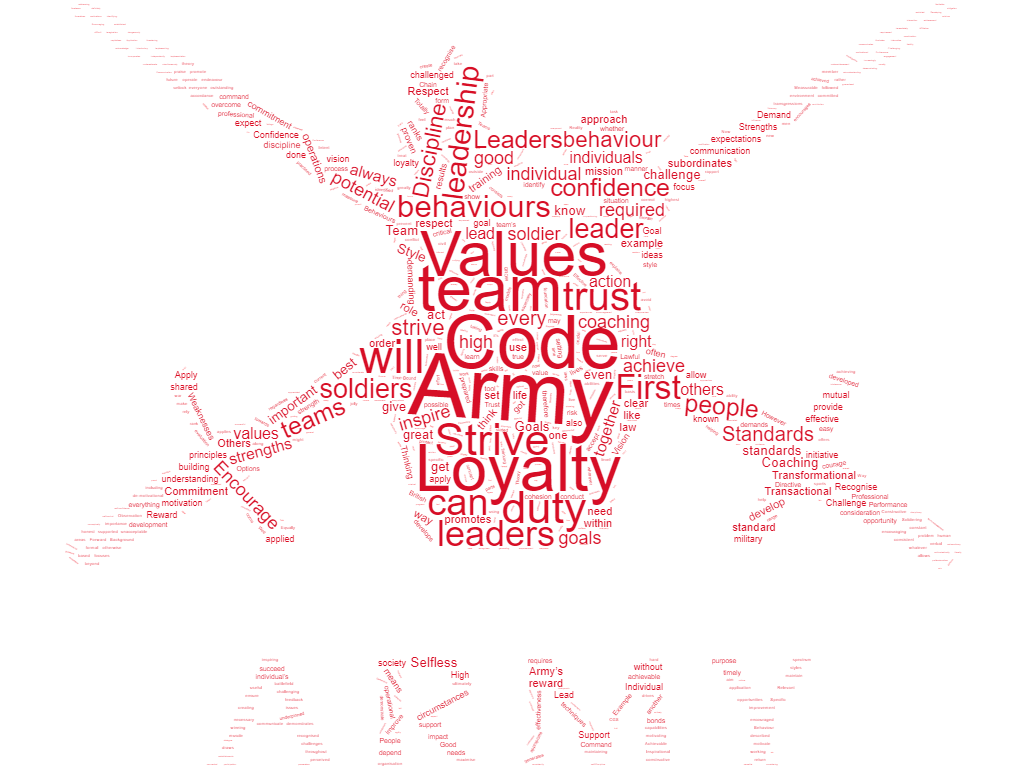 Word clouds aren’t a new idea. But that doesn’t mean they can’t be put to interesting use. During a lesson on my BT course at the Army School of Education, we did a short activity creating word clouds and then discussed how they might be used. The most popular suggestion was that they are a quick and approachable tool to analyse text. This would obviously have utility for any group of students in both a military or civilian context.

A task could be set up with students where they take a large piece of text and create a word cloud from it. Allowing students to quickly identify key themes, form connections between concepts, or even just explore the vocabulary in a piece of text all while using some basic IT skills. If nothing else, it’s a quick way to get learners doing something creative and visually engaging with text while also breaking down a few barriers to reading a long or challenging piece of writing.

Following this lesson, I wanted to explore ways you could use a word cloud to open up discussion around culture. Partly as an IT challenge for myself (I’ve never tried to do a custom shaped word cloud before) and partly because I think it would make for an interesting activity in a lesson I’m planning for next week. Basically, I was asking myself. Could I do a bit more with word clouds? Stretching the IT side of it while still hitting literacy and getting students talking about how they perceive organisational culture.

I thought an engaging task could be planned where the words we associate with a group, place, or organisation could be made into a word cloud shape which is associated with that group, place, or organisation. To that end, I thought I would give it a try by making an ETS word cloud using an ETS page on British Army Website, a vector graphic I produced using Inkscape a free open source vector graphics editor, and a free word cloud tool called wordclouds.com.

It was a quick enough task to do, and you easily see the keywords popping out. Development, learning, education, languages and so on. All themes which you could use as a prompt to discuss what the branch is about packed up in a visually interesting way. So far, so good.

I thought I would also give it a try using the Army Leadership Code and the British Army Emblem. You can see the results on Twitter below. You can get good results in only 5 minutes even if you want to make a bespoke cloud like this. The process is simple. Take your image. Create a simple vector (don’t worry there is a guide for that) upload it to wordclouds.com and then add your text. This is a simple IT task anyone even someone with low level IT skills could get to grips with without much support.

.@BritishArmy @ArmySgtMajor made this #WordCloud based on text drawn from the Army Leadership Code during an @ArmySchofEdu BT course #EdTech session today. Thought you might like it. #ArmyEducation pic.twitter.com/Z836O5f2OK

So, How do we use this to explore culture? Well, this is my idea… With some ways the level of the task could be differentiated for different groups.

Get your students to write a short piece about their cap badge including things like why they chose it, what it means to them, and what part it plays in the Army. Then, get them to find a suitable image of their cap badge, produce the vector and word cloud from the three elements.

They can then pick out the keywords and identify particular themes or ideas which stick out the most. This could be used to promote discussion between different learners about how they perceive the culture within their cap badge. Showing each other the visual result of the word cloud would get more reluctant readers involved while providing a visual aid that a learner could back brief their peers using.

Getting them to write the piece themselves is not only a good functional literacy task, but it would also identify any bias they have internalised, giving more points for discussion. Asking them to make the vector themselves is a quick little IT task which would stretch some of the learners and give them an insight into different image formats they might not be familiar with again a nice bit of IT functional skills put into the mix.

Get your students to find their own cap badge’s page on the British Army website. They could then download a pre-prepared vector from the DLE and create a word cloud merging the two.

This would be a much quicker task than the previous option but affords the same opportunities for discussion. It loses some of the personal perspectives you would gain from the written piece in option one but would still be an effective way to get students thinking about organisational culture.

The same could be done using web pages about different countries, or news articles about different world leaders or events. I applied the technique to the British Army Leadership Code and an ETS webpage. But you could do the same with a piece of text specifically about values and standards or even the CGS’s leadership intent document. All as a vehicle to explore these ideas. You can obviously apply this technique to a whole host of things and it would work in both a mainstream education setting rather than a workplace one. But, by adding a custom visual element with the vector graphic and an IT task producing the word cloud and I think it’s possible to produce an activity which is more active and engaging for your learners than a standard discussion would be.

TL;DR, Use free software, to make custom word clouds in order to promote discussion on a topic of your choosing engaging both visual, kinesthetic and read/write learners.

Richard Maclachlan is an Assistive Technologist working at an FE college in the north west of England. You can contact him at contact.maclachlan@gmail.com or by using the form above.
%d bloggers like this: